Terry Todd was an avid nature lover and longtime supporter of the Kalamazoo Nature Center and many other community organizations. She was an advocate for education and believed that people of all ages should never stop learning. The Terry Todd International Speaker Series was created by her family as a memorial to her and in recognition of her commitment to these ideals. This endowment fund invites dynamic individuals in the fields of nature and the environment to Kalamazoo to share their knowledge and passion with the community Terry loved. 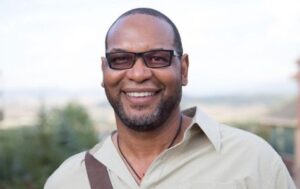 Dr. Lanham discussed what it means to embrace the full breadth of his African-American heritage and his deep kinship to nature and adoration of birds. The convergence of ornithologist, college professor, poet, author and conservation activist blend to bring our awareness of the natural world and our moral responsibility for it forward in new ways. Candid by nature — and because of it — Lanham examined how conservation must be a rigorous science and evocative art, inviting diversity and race to play active roles in celebrating our natural world.

J. Drew Lanham is a native of Edgefield and Aiken, South Carolina. He holds an endowed chair as an Alumni Distinguished Professor and was named an Alumni Master Teacher in 2012. Dr. Lanham is a widely published author and award-nominated poet, writing about his experiences as a birder, hunter and wild, wandering soul. He is the author of “The Home Place: Memoirs of a Colored Man’s Love Affair with Nature” and “Sparrow Envy”.

Partners: this is a bookstore and Kalamazoo Public Library

Thanks to our sponsors:

This lecture by Dr. Michelle Johnson contextualized the Raising Hay podcasts and included her interview from the “State of Water.” The conversation articulated a distinctive environmental perspective at the intersection of place, ancestry, food and cultural insistence. Listen to the podcasts, Raising Hay and Planting Roots: Black Women, the Arts, and Farming here >

Michelle S. Johnson is a public scholar at the Institute for Public Scholarship in the fields of African American history, literature and cultural production.   During her work as the Freedom Trail coordinator for the State of Michigan, Dr. Johnson solidified her public scholarship and leadership and expanded her contribution to assist professional and lay-historians in the preservation, documentation, and promotion of Underground Railroad histories.

​Johnson currently consults on a statewide Black history project that documents the people, stories and places of late 19th century Michigan.  She researches, writes and lectures for academic and public settings on aspects of African American culture including Paradise Valley, Idlewild and Motown.

A powerful work of history, essay, testimony, and polemic, Amitav Ghosh’s new book, “The Nutmeg’s Curse” traces our contemporary planetary crisis back to the discovery of the New World and the sea route to the Indian Ocean. The Nutmeg’s Curse argues that the dynamics of climate change today are rooted in a centuries-old geopolitical order constructed by Western colonialism. At the center of Ghosh’s narrative is the now-ubiquitous spice nutmeg. The history of the nutmeg is one of conquest and exploitation—of both human life and the natural environment.

Like communities around the globe, Kalamazoo has experienced stress caused by the COVID-19, racial reckoning, and climate change. KNC’s Terry Todd Interational Speakers Series invited adrienne maree brown to join Kalamazoo virtually in September, 2021, to help us explore ways we can emerge from these challenging times. Her talk and the companion programs in the Community Emergence Series offered a call to listen and imagine collective community solutions

Inspired by Octavia Butler’s explorations of our human relationship to change, “Emergent Strategy” is radical self-help, society-help, and planet-help designed to shape the futures we want to live. Change is constant. The world is in a continual state of flux. It is a stream of ever-mutating, emergent patterns. Rather than steel ourselves against such change, this book invites us to feel, map, assess, and learn from the swirling patterns around us in order to better understand and influence them as they happen. This is a resolutely materialist “spirituality” based equally on science and science fiction, a visionary incantation to transform that which ultimately transforms us.

View the Resource Guide from the event >

Dr. Dorceta Taylor is known as an environmental sociologist for her work on environmental justice and racism. She is the Director of Diversity, Equity, and Inclusion for the University of Michigan School for Environment and Sustainability.  Dr. Taylor explores the rise of the U.S. conservation movement and the origins of nature protection in America as well as historical and contemporary gender, class, and racial dynamics in nature protection around the country.

“I count the wings, not the feathers,” was the credo of the late modernist Charley Harper (1922-2007).  Brett Harper, the son of Charley and Edie Harper and director of the Harper studio, presented an illustrated lecture about his father’s 60-year career to  accompany an exhibition of Charley Harper’s work,  Nature Seen Through the Eyes of Artist Charley Harper.  Brett’s presentation demonstrated how Charley developed the style that he described as “minimal realism”, where he captured the essence of his subjects with the fewest possible visual elements. Harper’s true love was the portrayal of birds, animals, insects, sea life, in the world around.

Michael Pollan writes about the places where nature and culture intersect: on our plates, in our farms and gardens, and in the built environment.  Pollan is the author of five books: In Defense of Food: An Eater’s Manifesto (2008) The Omnivore’s Dilemma: A Natural History of Four Meals (2006), The Botany of Desire: A Plant’s-Eye View of the World (2001), A Place of My Own (1997), and Second Nature: A Gardener’s Education (1991). Pollan co-starred in the documentary, Food, Inc. (2008), for which he was also a consultant.

Since first being “thrown overboard” by his father Jacques Cousteau at the age of seven with newly invented SCUBA gear on his back, Jean-Michel has been exploring the world’s oceans for much of his life.  Jean-Michel founded the Ocean Futures Society in 1999, a marine conservation and education organization which fosters a conservation ethic, conducts research, and develops marine education programs.

Brother Yusuf was an Environmental Educator at the New York Department of Environmental Conservation and coordinator of Urban Outreach. His thought provoking presentation focused on how to engage youths in the natural world through outdoor recreational activities like boating, camping, fishing, hiking and skiing excursions. A leader in the No Child Left Inside movement, Brother Yusuf left us too soon, but his insights on the transformations that occur when youths spend meaningful time outdoors, will impact many for decades to come.

Jeff Corwin is an Emmy winner as host of ”The Jeff Corwin Experience”, one of the most popular shows on cable television. Corwin has been working for the conservation of endangered species and ecosystems around the world since he was a teenager.

Cheryl Charles is President and CEO of the Children & Nature Network and co-chair of the Education for Sustainable Development Working Group of the Commission on Education and Communication, World Conservation Union (IUCN-CEC). Cheryl is an innovator, educator, author and organizational executive. Cheryl served for close to 20 years as national director of the two most widely used environment education programs in North America, Project Learning Tree and Project WILD, and has received numerous awards for her leadership.

Jerome Ringo has vast experience in organizing environmental and labor communities and his drive to further diversify the environmental movement bridges many of the Apollo Alliances partners to ]create a broad based coalition, providing real solutions to our energy crisis.

Andrew is a globally recognized expert on green businesses and is dedicated to helping companies both large and small use environmental strategy to grow, create enduring value, and build stronger relationships with employees, customers and other stakeholders.

Jerome Ringo has vast experience organizing environmental and labor communities and his drive to further diversify the environmental movement bridges many of the Apollo Alliances partners to create a broad based coalition, providing real solutions to our energy crisis.

Douglas W. Tallamy is professor and chair of the Department of Entomology at the University of Delaware in Newark Delaware. He has written more than 65 research articles and has taught insect taxonomy, behavioral ecology and other courses for many years. Chief among his research goals is to understand the way insects interact with plants and how such interactions determine the diversity of animal communities.

Kalamazoo Nature Center hosts Richard Louv for a second time at the Concert Auditorium at Michigan State University. The “No Child Left Inside” movement has grown to a national scale and more than 2000 people attended to hear the story of the Children and Nature Network.

Jeff Corwin is an Emmy winner as host of “The Jeff Corwin Experience”, one of the most popular shows on cable television. Corwin has been working for the conservation of endangered species and ecosystems around the world since he was a teenager.

Richard Louv, child advocacy expert and journalist, has created a groundswell of action/reaction across the country with this powerful presentation of research showing the adverse effects of “nature deficit disorder” on today’s generation of plugged-in children.

Torn Turpin is a professor of Entomology at Purdue University. Dr. Turpin is the creator of Purdue’s “Bug Bowl,” a celebration of insect science. He has been featured in numerous news stories includingTime and People magazines, quoted on major television and radio programs, and has appeared on “Good Morning America,” the Guinness World Record Show” and the “Prairie Home Companion” radio show. He also writes a bi-monthly column, “On Six Legs” that appears in over 40 newspapers. He currently is a monthly guest on AM 920 magazine on WBAA.

Jack Hanna is the Director Emeritus of the Columbus Zoo and Aquarium. He is the television host of ”Jack Hanna’s Animal Adventures”. Jack shares conservation messages through stories of global animal encounters. He regularly appears on ”Good Morning America”, ”The Late Show with David Letterman”, ”Larry King Live”, and the ”Fox News Program”.

Dennis Fijikowski is the Executive Director of the Michigan Wildlife Conservancy. In 2001, this non-profit organization proved the existence of cougars in the Upper Peninsula with a variety of evidence including tracks, cougar-killed deer, and DNA from scat (droppings). The Conservancy recently proved with DNA and other evidence that cougars exist in the Lower Peninsula counties of Emmet, Presque Isle, Alcona and Roscommon.

Bil Gilbert is one of America’s most prominent and popular natural history essayists and authors.  Over the last four decades, Gilbert has appeared in Audubon, Smithsonian, Discover, Esquire, and the New York Times. And he’s authored several books, including Nature”, ”In God’s Countries”, and ”The Weasels”.

Ann Bancroft was inducted into the National Women’s Hall of Fame (1995), named MS. Magazine’s “Woman of the Year” in 1987, and featured in the book ”Remarkable Women of the Twentieth Century”. In 1986, Bancroft crossed 1,000 miles by dogsled from the Northwest Territories in Canada to the North Pole and the only female member of the Steger International Polar Expedition, earning the distinction of being the first known woman in history to cross the ice to the North Pole.

Dr. Robert Bakker is a paleontologist who began studying dinosaurs in the 1960’s. He introduced a new way of looking at dinosaurs and their role in the world and was the catalyst for what has been called the “dinosaur renaissance.” He is the author of “Dinosaur Heresies and Raptor Red”.

Dr. Jane Goodall is one of the world’s most recognized scientists, the recipient of numerous awards, the subject of many documentary films, and the author of more than ten books for children and adults, including the best-selling “In the Shadow of Man” (1971).